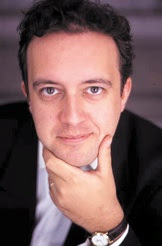 Bookshelf - the home of interesting bookshelves, bookcases and things that look like them - is a satellite site to Shedworking the lifestyle guide for shedworkers and those who work in shedlike atmospheres.

It is edited and published by Alex Johnson who is part of The Independent newspaper's online team and the founding editor/publisher of the internationally popular blog Shedworking. His book Shedworking: The Alternative Workplace Revolution is published by Frances Lincoln, while Bookshelf (the book of this blog) and Improbable Libraries are both published by Thames & Hudson. His latest books are The Book of Book Lists (The British Library) and Book Towns (Frances Lincoln). His next book is Shelf Life (forthcoming, autumn 2018, The British Library) and a Writers' Trumps game (Laurence King, forthcoming, autumn 2018).

Alex is an experienced journalist who has been editing, writing and designing for national magazines, newspapers and charities - including The Primary Club, Crohn's and Colitis UK, Age Concern and the Mentoring and Befriending Foundation - for the last two decades in the UK and Spain.