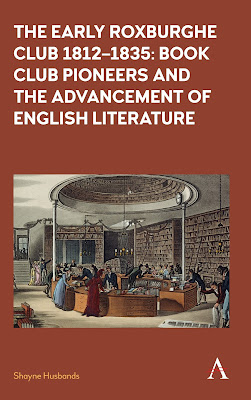 Some of you will be at least faintly familiar with The Roxburghe Club, founded in 1812 and the self-proclaimed "oldest society of bibliophiles in the world". But a common misconception about the club is that it was essentially a group of several dozen toffs, knocking back the claret, and indiscriminately frittering away their ill-gotten millions on any fancy-looking books that came their way, a kind of literary Hellfire Club but with fewer caves.

This is - as Shayne Husbands explains in her excellent and very readable book (subtitle: Book Club Pioneers and the Advancement of English Literature and published by Anthem Press) - a country mile wide of the mark. Instead, she patiently shows how aristocrats were in fact in the minority, and that rather than mere book collectors, the members were forerunners of the arts and crafts movement in their dedication to style and commitment to the printed word, several of them even owning and running their own presses.

They were also considerable scholars, especially in promoting Shakespeare and early Tudor poets, as well as talented writers themselves. While it is true that some of their collections do more than border on the obsessive - Thomas Dibdin who co-founded the club did not coin the term 'bibliomania' but did much to promote its useage -  Husbands shows that their overriding interest was not merely to own 'pretty books' but to safeguard part of the nation's literary heritage that would otherwise have probably disappeared.

Although this will be largely read by academics, its 180 intelligent and thoughtful pages deserve a much wider readership, and many visitors to Bookshelf would certainly enjoy it.
Posted by thealexjohnson at 11:28