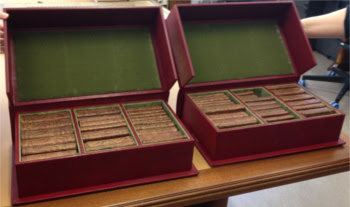 Like a 17th century version of a Kindle. Two red leather cases, designed in the 1970s by Sangorski and Sutcliffe to look like two large books, open up to reveal 59 small volumes covering just about everything that a wealthy educated gentleman would want to read on his travels. Charles I's travelling library was acquired through a bequest. The collection of tiny books have gold-tooled bindings and some are believed to have been signed by the Prince himself. Titles include classical texts by the poet Ovid and the philosopher Cicero as well as bibles and religious books such as De Imitatione Christi by Thomas A Kempis.

Email ThisBlogThis!Share to TwitterShare to FacebookShare to Pinterest
Labels: mobile